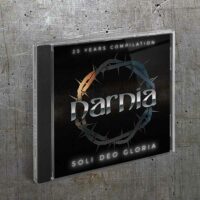 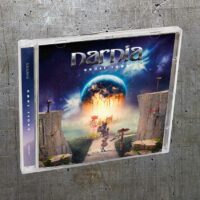 Twenty-seven years into a career that continues to grow, Swedish metal band Narnia takes huge steps into an exciting chapter with the new album ’Ghost Town’. The seasoned five-some once again shows how to shape a masterpiece with this melodic metal future classic.

On the ninth studio album, ’Ghost Town’, Narnia has picked the icing on the cake from its vast catalog. You can’t simply label this album a neoclassic metal album or a power metal album, even though these elements are present. There are also parts that are progressive, modern, heavy, or just creatively different. But you can summarize by saying this is well-crafted piece of classic and melodic metal.

Co-founder, guitarist, and producer CJ Grimmark is the crucial architect of the band’s sound, and also its primary songwriter along with co-founder and lead singer Christian Liljegren and bassist Jonatan ”Jono” Samuelsson. Through well formulated lyrics and melodies created to enhance the music, the songwriting team has explored new modes of expression that are well represented in songs such as ’Thief’, with its dramatic arrangement, anxiety-laden, expressive imagery, and the progressive ’Modern Day Pharisees’, a song dealing with the subject of hypocrisy.

The title track, ’Ghost Town’, was first introduced to the cheering live-audience at Sweden Rock Festival 2022 and is now an obvious part of the set list with its bombastic four on the floor-pulse and sing along chorus. The heartbeat of Narnia, Andreas “Habo” Johansson, does a tremendous job behind the drums, and spares no energy.

Martin Härenstam and his keyboards have been given a large but tasteful space on the record, and range in sound from vintage synths to grand piano.

The record’s neoclassical gem, ’Rebel’, with a nod to the band’s earliest influences, should appeal to longtime fans. But also, more immediate songs like the soon-to-be crowd pleasers ’Hold On’, ’Wake Up Call’, and ’Alive’. ’Descension’, on the other hand, is more progressive, but there is a constant and clear common thread throughout the entire production that ties it together brilliantly.

’Out of the Silence’ picks up where 2019’s ’The War That Tore the Land’ left off as the album’s only ballad. Featured by Saviour Machine’s frontman Eric Clayton, who reads the Lord’s prayer with his deep baritone operatic voice.

’Glory Daze’ is perhaps the album’s heaviest song, which also addresses one of today’s biggest problems: Stress and chasing the wind. Something that Liljegren himself experienced during a burnout.

– Different songs will appeal to different people lyrically, but we cover a variety of topics throughout the album, and I’m sure people will be able to relate to them, both musically and spiritually. Some of these songs stand out a bit from our previous repertoire, but without abandoning our historical influences. Liljegren explains and continues:

– This is an album with a positive message combined with bombastic music. You can’t have one without the other when it comes to Narnia. Liljegren concludes.

Lyrics that make you reflect combined with the broad musical breadth the band possesses, along with a solid production, is Narnia’s musical trademark which runs throughout the entire album.

If the latest studio album ’From Darkness to Light’ from 2019 marked the way, ’Ghost Town’ is a more than worthy sequel with a life of its own.

“Ghost Town” is produced by CJ Grimmark, mixed by the band”s sound engineer Viktor Stenquist, and mastered by Thomas Piec Johansson. It will be available on all digital platforms, CD, and vinyl on March 17th, 2023, in collaboration with Sound Pollution Distribution.

Soli Deo Gloria from 2021 is the band’s second compilation-album.

Narnia sums up its first 25 years with the compilation album: ’Soli Deo Gloria’, a collection of 30 songs that show the band’s wide range and long experience of being established as one of the best melodic metal bands on the metal scene. Songs from the first album ‘Awakening’ to the latest studio album ‘From Darkness to Light’ along with bonus tracks from different album versions, clearly shows how the band has managed to maintain a high level throughout its history and at the same time, how to hungrily strive for a promising future.

Meanwhile, the band’s ninth studio album is in the making and scheduled for release in 2022 — this is a great introduction to the band for new listeners, as it is a gold mine for current fans to revisit favorites and discover lesser-known songs.

’Soli Deo Gloria’ was released on double-CD, and digitally on November 5th, and distributed by Sound Pollution.

We use cookies on our website to give you the most relevant experience by remembering your preferences and repeat visits. By clicking “Accept All”, you consent to the use of ALL the cookies. However, you may visit "Cookie Settings" to provide a controlled consent.
Cookie SettingsAccept All
Manage consent

This website uses cookies to improve your experience while you navigate through the website. Out of these, the cookies that are categorized as necessary are stored on your browser as they are essential for the working of basic functionalities of the website. We also use third-party cookies that help us analyze and understand how you use this website. These cookies will be stored in your browser only with your consent. You also have the option to opt-out of these cookies. But opting out of some of these cookies may affect your browsing experience.
Necessary Always Enabled
Necessary cookies are absolutely essential for the website to function properly. These cookies ensure basic functionalities and security features of the website, anonymously.
Functional
Functional cookies help to perform certain functionalities like sharing the content of the website on social media platforms, collect feedbacks, and other third-party features.
Performance
Performance cookies are used to understand and analyze the key performance indexes of the website which helps in delivering a better user experience for the visitors.
Analytics
Analytical cookies are used to understand how visitors interact with the website. These cookies help provide information on metrics the number of visitors, bounce rate, traffic source, etc.
Advertisement
Advertisement cookies are used to provide visitors with relevant ads and marketing campaigns. These cookies track visitors across websites and collect information to provide customized ads.
Others
Other uncategorized cookies are those that are being analyzed and have not been classified into a category as yet.
SAVE & ACCEPT